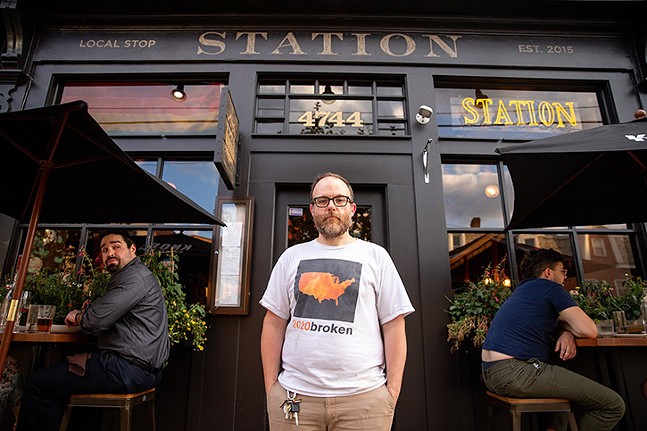 Finn and her husband work every day of the week. Their day often starts by 8 a.m., and it doesn’t end until 1 a.m. They prepare and cook food, manage their restaurant, and wash dishes by themselves because they can no longer afford to hire other people. They spend the one day their restaurant is closed shopping for ingredients because they can no longer afford to get them delivered. Finn says these hardships are caused by what she calls the “bloodsuckers”: delivery apps.

Finn requested anonymity for this story out of fear of retaliation from delivery apps. She and her husband use Grubhub, DoorDash, and Uber Eats for their Asian cuisine restaurant in Pittsburgh, and they worry that delivery apps will lower their listing on searches if they openly speak out against them. Finn says her restaurant also is paying up to 30% in delivery fees per order, cutting into their margins and, many times, hurting her small business.

And they aren’t alone. Pittsburgh City Paper also spoke to Station in Bloomfield and Carson Street Deli in South Side about their experiences with third-party delivery apps, and both said they have used delivery apps for accessibility to customers. But when the pandemic shifted most of their business onto the apps, the margins lost to delivery fees became unsustainable.


“It’s kind of like commenting anonymously on the internet,” says Curtis Gamble, chef and owner of Station. “I think you could tell people until you’re blue in the face, like, ‘Hey, this actually costs me money.’ But because of the anonymous nature of it, the average consumer, and I don’t mean this to be rude, but the average consumer just doesn’t care. They want convenience.”

However, a new piece of state legislation could reduce the weight of responsibility on consumers to save restaurants by limiting the fees third-party apps could charge. While delivery app companies believe regulations will hurt restaurants and drivers, many restaurant owners don’t want to, or can’t, sustain the lost margins from high delivery fees. Some restaurants have found alternatives to national third-party apps, but not all restaurants have been able to accomplish this. That leaves scores of Pittsburgh restaurants somewhat reliant on these delivery apps, even though they might want to escape from their influence.

Both Mike Murphy, owner of Carson Street Deli, and Finn say delivery apps will change the placement of an establishment’s listing on the app, depending on the percentage of delivery fees the establishment is willing to pay. High fees are placed higher up, while lower fees can fall to second or third pages.

Murphy doesn’t mind where Carson Street Deli is placed in search results, since he says customers will seek out his restaurant specifically on third-party apps. But Finn says she depends on the visibility to stay afloat, even though higher rates eat into her profit margins. For Gamble, however, simply figuring out the exact percentage the apps take is difficult.


“Information and clarity from them that is not easily accessible in any shape or form,” Gamble says. “It’s not in their interest to make it easy for you to know.”

Delivery apps also run promotions that, if restaurants choose to opt in, can push their listing to the top of search results. The establishment, however, has to pick up the lost revenue. For Finn, buy one get one promotions leave her covering the cost of ingredients for two meals with only 70% of the purchase price of one meal.

“If you cover, I can do that, if you not cover, no,” Finn says, referring to her communications with delivery app representatives. “And they still take 30% from our bill, and you give to the customer special offer, buy one get one free, that means you want to kill the restaurant, and all the restaurants, nobody can survive from this pandemic.”

Murphy says his restaurant uses Grubhub and Uber Eats. Borrowing from his experience as an investment banker, Murphy has been able to negotiate his rates to the 22-30% range, and while he believes that the market will eventually force delivery apps to reduce their fees, he also supports legislation to formalize and expedite that process.

“I don’t believe the government should regulate fees,” says Murphy. “Having said that, I’m making an exception. Regulate the hell out of it, because they’ve hurt some people.”


Throughout the pandemic, local bars and restaurants have struggled with shutdowns for indoor dining. Some, such as Brugge on North on the North Side and Brillobox in Bloomfield, say they closed their doors permanently because of the pandemic. Gamble and Finn also point to the overwhelming shift to delivery rather than dine-in service as giving delivery apps disproportionate power over restaurants’ access to customers. Many restaurants and bars did not previously have delivery options set up, seemingly leaving them more dependent on third-party delivery apps than before.

The major national delivery apps — Grubhub, DoorDash, and Uber Eats, which acquired Postmates in July 2020 — face little competition from each other, with different apps dominating different metropolitan centers. According to data firm Bloomberg Second Measure, these four apps represent 99% of the food delivery app market, even as U.S. consumers increased usage rates in 2021. A class-action lawsuit filed in 2020 against DoorDash, Postmates, and Uber Eats alleges a lack of competition allows apps to keep fees for restaurants high and wages for drivers low.

“Regulate the hell out of it, because they’ve hurt some people.”

Some restaurants, including Carson Street Deli, raise their prices on delivery apps to help offset some of the lost margins. Gamble also noted that, after additional service fees on the app, items become more expensive than he feels comfortable with.

While it can be difficult to get enough support for any bill to pass, especially ones introduced by Democrats in the Republican-controlled chambers, state Rep. Sara Innamorato (D-Lawrenceville) believes in the importance of introducing such legislation.

“The political reality in Harrisburg is that, as rank and file members of the minority party, it’s highly unlikely that our bills come up for consideration even in committee,” says Innamorato, who is the primary sponsor of the bill. “Oftentimes, we make bills because it’s the right thing to do, and it can signal a direction that we’d like our party to go in.”

Other major cities, including Washington, D.C., New York, Chicago, and Seattle have placed similar limits on third-party delivery apps, with many of them setting the cap at 15%. Currently, most delivery apps charge fees that range from 20-40% of what restaurants make in app-based revenue. 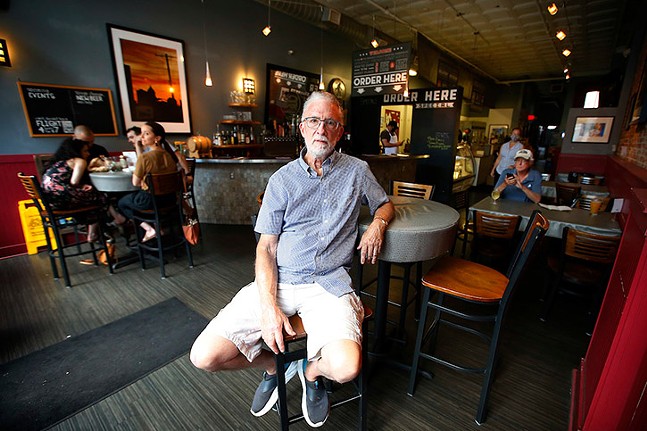 Mike Murphy, owner of Carson Street Deli, poses for a portrait in the South Side on Sun., June 27, 2021.

“Colleagues on both sides of the aisle have recognized over the past year how difficult life has been for our restaurant industry,” says Nick Pisciottano (D-West Mifflin), who introduced the bill with Innamorato. “And our small businesses and, locally, our mom and pop restaurants especially, have a lot of different structural barriers to success.”

Pisciottano says national chains have more bargaining power with delivery apps and are able to drive down delivery fees, meaning they get to keep more money per customer’s order. Smaller businesses, however, are often unable to negotiate the same low fees, making it more difficult for them to afford basic costs of running a restaurant, such as rent, ingredients, utilities, insurance, and, for some, a liquor license.

City Paper reached out to Uber Eats, GrubHub, and DoorDash to ask about the recently introduced legislation that would limit their usage fees. Uber Eats and GrubHub did not respond to requests for comments, but DoorDash said the legislation would hurt restaurant owners and their delivery drivers.

“DoorDash has always supported Pennsylvania restaurants. Price controls lead to fewer orders for restaurants and lost earnings for Dashers. … We’re always eager to engage with policymakers on solutions that truly support restaurants,” says a DoorDash spokesperson, although they declined to comment on whether DoorDash supports HB 1617 specifically.

It should also be noted that hundreds of Pittsburgh-area restaurants are listed on national food delivery apps, and apparently use the apps without incident or complaint. But there is also a growing contingency of local restaurants willing to speak out against these apps. As City Paper reported in May 2020, Pittsburgh restaurants The Warren, Iron Born Pizza, and My Big Fat Greek Gyro all criticized GrubHub for what they felt were unfair fees.

Both Murphy and Gamble expressed concern about the quality of their food when it’s delivered via delivery app drivers, since it can take longer to reach customers because delivery drivers often have multiple orders in their car at once. “If something goes bump in the night, it’s wrong, or it’s cold, or it takes too long, [customers] don’t care,” says Murphy. “But they’re not looking at Uber, they’re not looking at Grubhub. It’s the Carson Street Deli.”

But for less established Pittsburgh restaurants, and those who face language and cultural barriers, setting up delivery through a website can be difficult, leaving them more reliant on third-party apps.

“I think you could tell people until you’re blue in the face, like, ‘Hey, this actually costs me money.’”

“The first generation of immigrants, they are not good at technology,” says Finn’s sister, who helped with translations. “They do not know how to deal with all this stuff, especially in pandemic. I try to help them find somebody, maybe do their own website. … But it’s very, very difficult.”

All three restaurant owners who spoke to City Paper encouraged people to order directly from their restaurants, whether via phone or through their websites. While each recognizes the convenience of delivery apps for customers, the money restaurant owners save from avoiding delivery fees helps keep their establishments open and allows them to hire service workers.

Innamorato says the bill will prevent any reduction in fees from coming out of delivery drivers’ earnings. While Innamorato says “there’s not going to be one bill that’s going to be the silver bullet” to fix the problems third-party delivery apps cause for restaurant owners and workers, she is hopeful future legislation and worker cooperatives might help to protect the restaurant industry and workers.

“The more people that can have access to the things that they want without a third party taking a huge dig out of it, I think it’s just, it’s good for everybody,” Gamble says. “It’s good for business, and it’s good for consumers as well.”