Announced way back at CES 2021, time sure flies, Dell announced a slew of new computers and monitors. Among those announced was the new Dell OptiPlex 7090 Ultra. This little computer actually fits within the monitor stand of Dell monitors, and other stands. It can also be mounted to the back of monitors. It is basically a small PC that offers plenty of power while taking up little to no space in one’s workspace.

Announced way back at CES 2021, time sure flies, Dell announced a slew of new computers and monitors. Among those announced was the new Dell OptiPlex 7090 Ultra. This little computer actually fits within the monitor stand of Dell monitors, and other stands. It can also be mounted to the back of monitors. It is basically a small PC that offers plenty of power while taking up little to no space in one’s workspace. 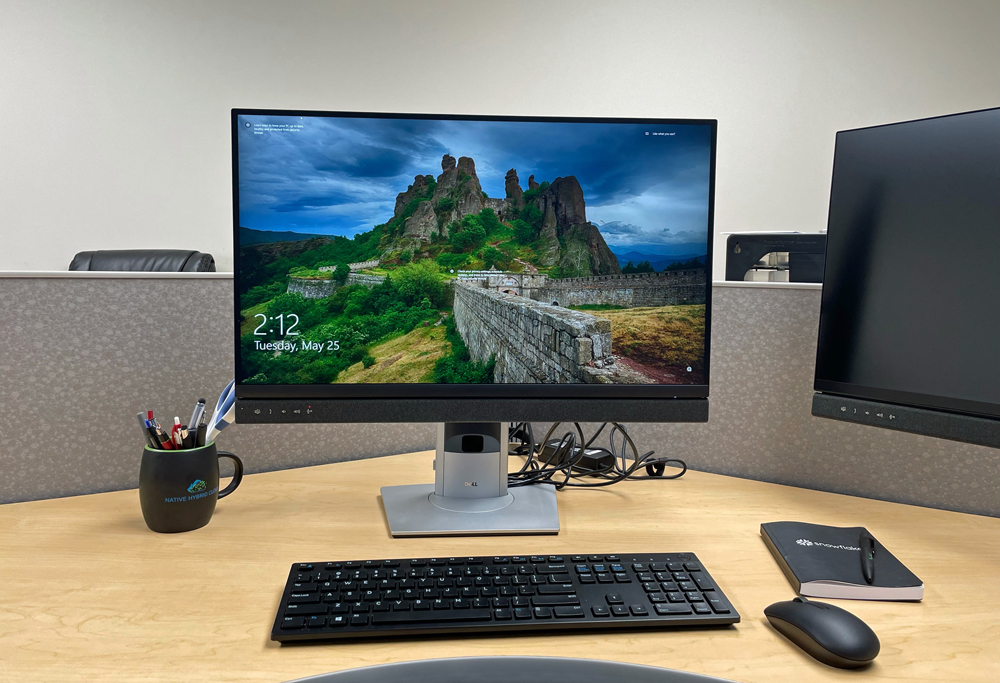 The Dell OptiPlex 7090 Ultra acts like an All-in-one, though it doesn’t come with a monitor. While it acts like an AIO, it does have much the feel of a traditional desktop as well. Users can upgrade and swap out components as they would with a traditional desktop while taking up zero space. Another benefit of the AIO feel is that if something goes wrong with the monitor, it can be replaced without the compute unit needing to be swapped out.

From a hardware perspective, the Dell OptiPlex 7090 Ultra can house up to an Intel Core i7 with 4 cores, up to 64GB of DDR4, 3200MHz of RAM, lots of storage options including HDD, SSD, and Optane, and various network connections wired and wireless, including WiFi 6.

The computer comes with Dell Optimizer, the company’s AI that studies how users leverage the computer and makes improvements in performance along the way. Some may say that the where the device lacks is in the GPU department with the choice of an Intel UHD or Iris Xe. But this isn’t a workstation nor is it made for power users so either should be fine.

Dell also offers the less powerful Dell OptiPlex 3090 Ultra which is also a zero-footprint computer with fewer power options at a lower price. The Dell OptiPlex 7090 Ultra starts at $800 with an Intel Core i3, 4GB of RAM, and a 500GB HDD.

On its own, the 7090 looks like a funny-shaped NUC or some other iteration of a micro PC.  Once in the monitor stand, it looks like a more robust version of any of the Dell Monitor stands, they more or less look the same. 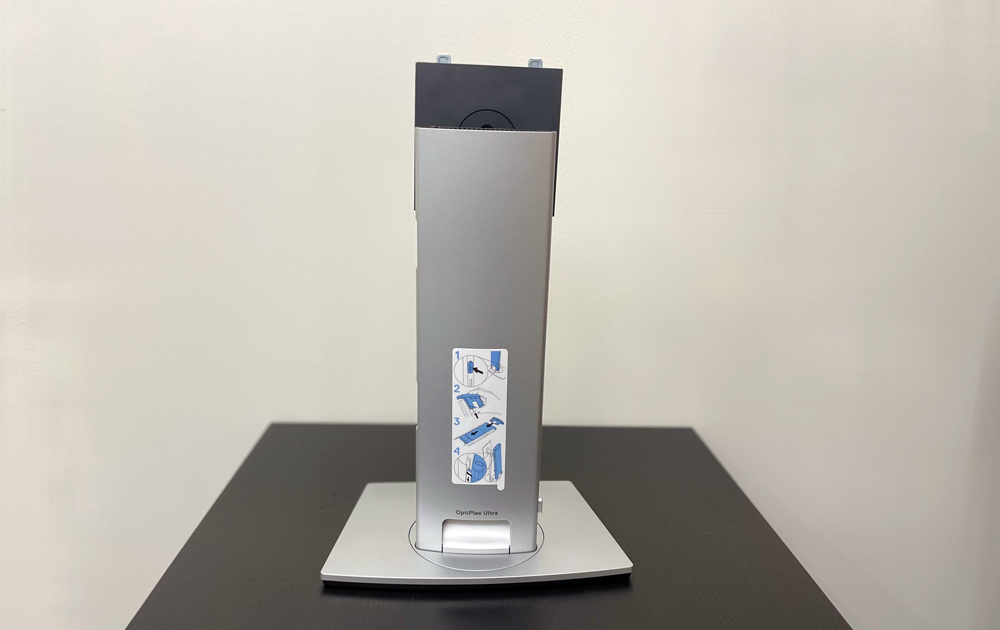 The computer itself looks like something that would snap onto a larger workstation. It is black and slim, sliding into the stand no problem. There is Dell branding on the back but that is swallowed up in the stand. 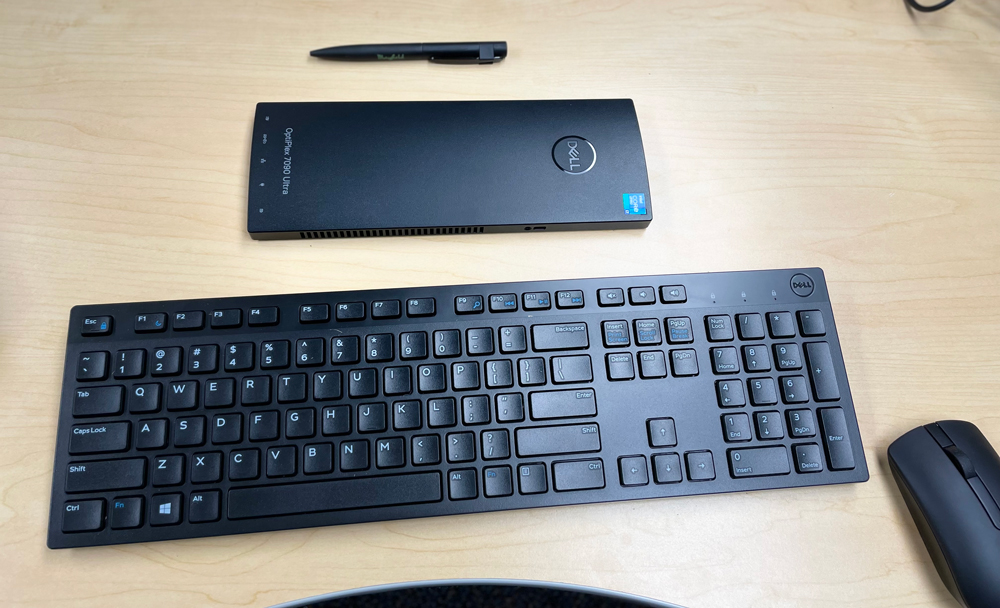 The most used ports are all on the bottom such as the DisplayPort, network port, USB-C that can double as a display, power, and a USB Type-A. This makes it easy to access everything. 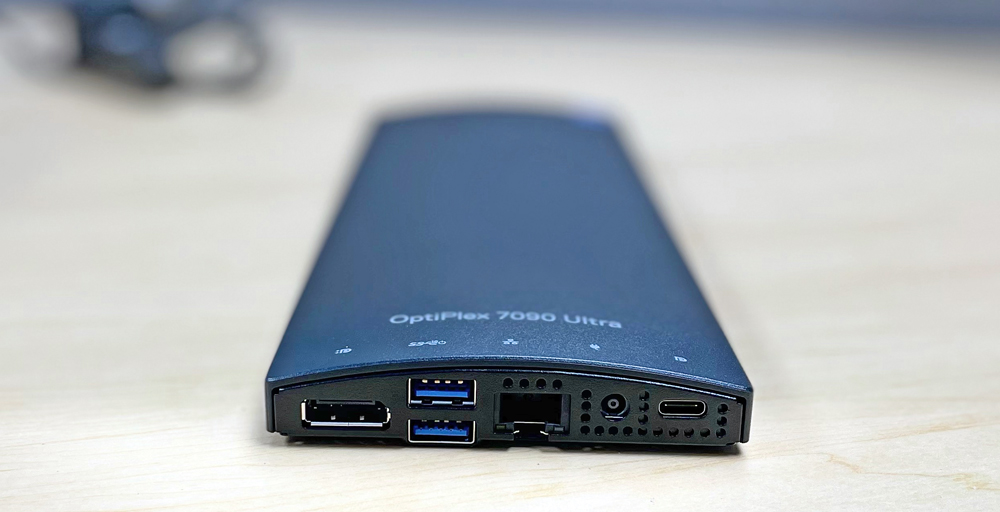 On the side is a USB-A, a Thunderbolt 4, and a headset jack.

It literally took longer to unbox the Dell OptiPlex 7090 Ultra than it did to set it up. Being a real man, real dumb man, I didn’t bother with the instructions and had to take it apart and put it back together correctly and it was still quicker than the unboxing. 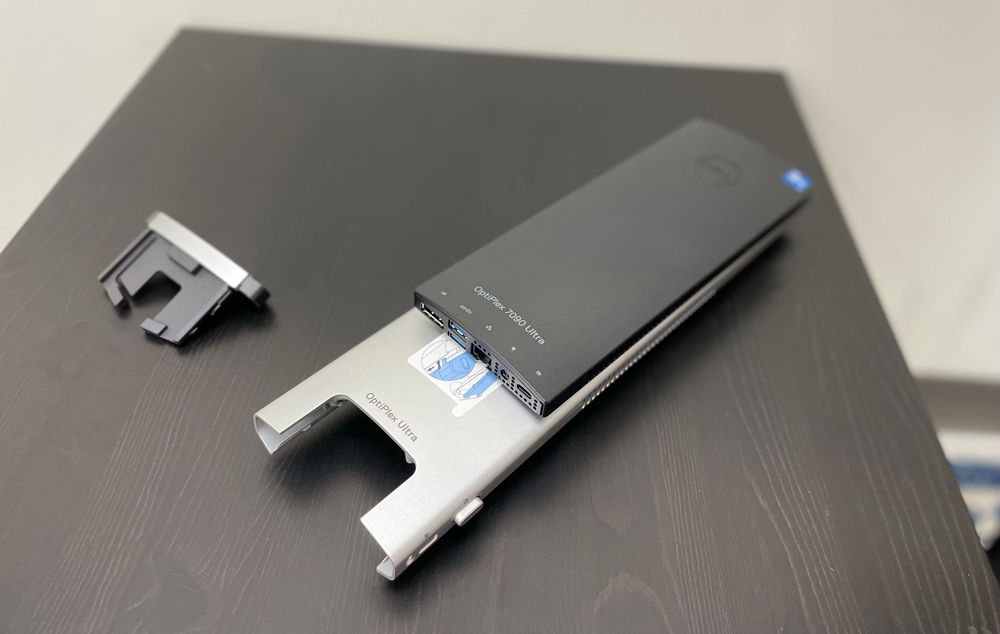 In the box, you have the stand, in two pieces, and the 7090 computer along with all the cords. The base of the stand connects the same way all Dell monitor stands connect. After that, you like the cap off of the top of the stand and slide the 7090 in.

Here is where I messed up. The main cords connect through the bottom of the device. Once it is in the stand, this becomes incredibly difficult. No problem. Slide it out, connect the cords (there are even little clips to connect them to the stand), and slide it back together.

Once all is said and done, you can clip a Dell Monitor onto the stand. In this case, we used the Dell C3422WE monitor (go big or go home) and I feel, personally, that Dell should provide me with one for home use. We also used the Dell C2722DE monitor.

Running around the $1000 mark on price, the Dell C3422WE is a 34” curved monitor that is primarily created for video conferencing. The monitor has a Microsoft Teams button and is certified for use of the software. It has a pop-up IR camera on top (with microphones, IR LEDs, and the Webcam all built-in on top). 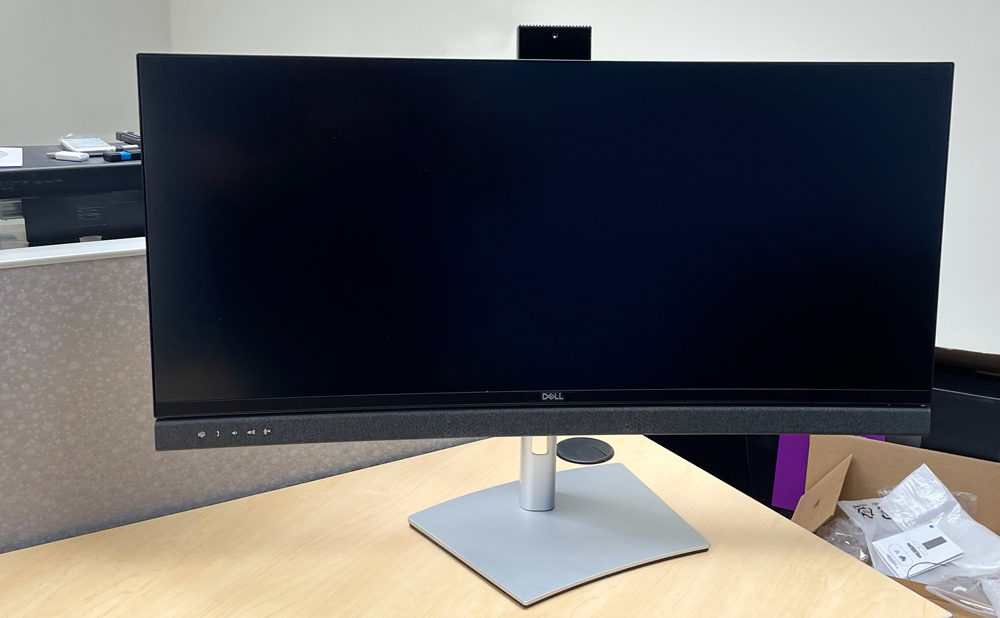 The bottom has built-in speakers along with the aforementioned Microsoft Teams button, volume control, and microphone mute. 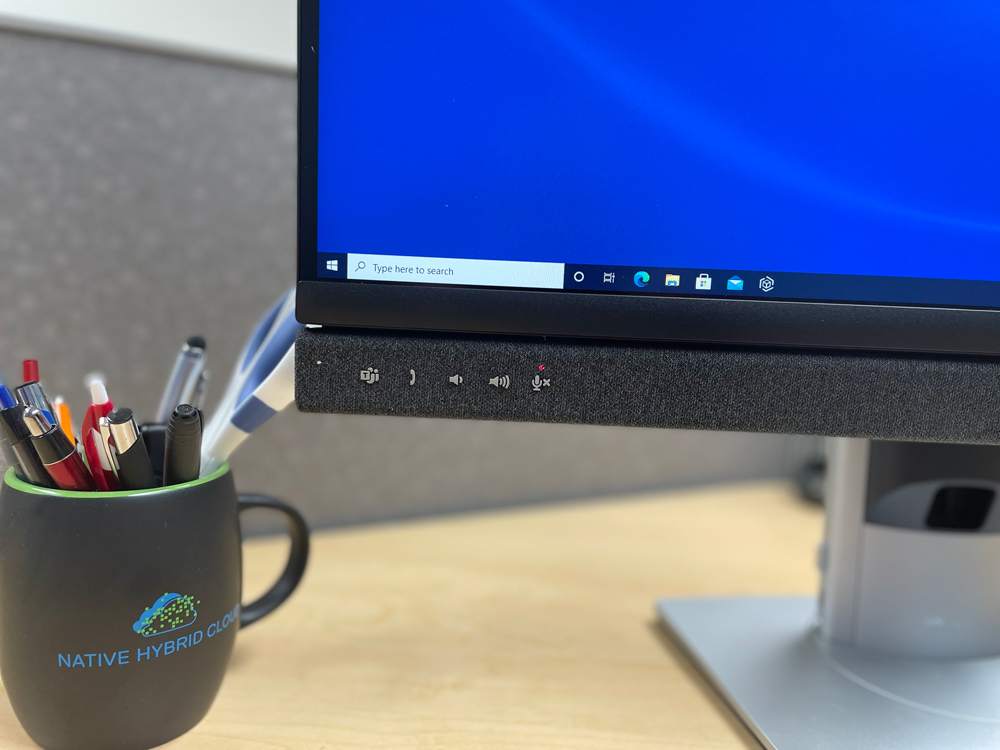 The back of the monitor gives users multiple options for connecting to their computer. There is a power button here and a joystick for controlling Dell Display Manager that gives users a fast way to swap through different settings.

Pulling out of the box, it immediately strikes one as a nicely built monitor, though that may have something to do with the weight. The C3422WE is not a light monitor. With the Dell OptiPlex 7090 Ultra, this is a bit of an issue as the monitor wants to slide down to the bottom of the stand as you are using it. Though the monitor I’m currently using sits low as does the one I use at home. It does limit some of this monitor’s tilt and swivel functionality.

Overall, this is a very nice monitor and it can make remote work much better and help with collaborations.

The Dell C2722DE monitor is also a conferencing monitor with an IR camera built into the top of it. It has many of the same benefits as the C3422WE above without the large curved screen or the big price tag as this one comes at nearly half the price. 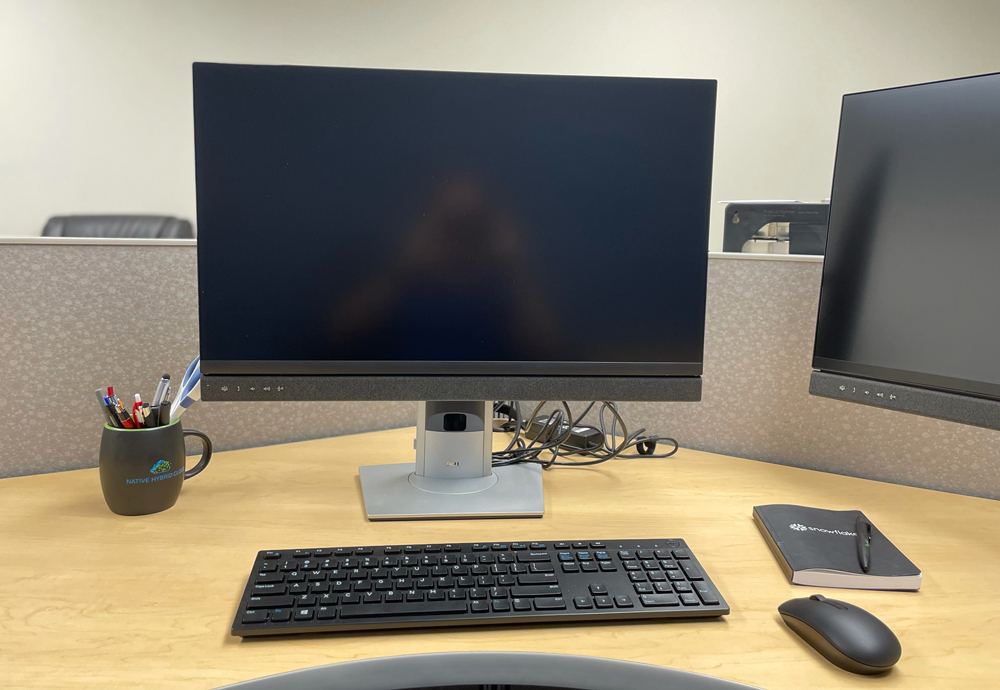 Using the C2722DE, it also has a very nice picture and isn’t quite so overwhelming. This would fit better on a smaller workspace. The weight of the monitor is more suited for the stand that comes with the 7090 Ultra as well, with no sliding down on its own.

Great picture and good sound, yet another solid conference monitor from Dell without the high price tag this time.

Not being a workstation, we aren’t going to run it through our normal graphics-intensive benchmarks, as that wouldn’t give users a good idea of how it runs. Instead, we will run PCMark10 and Blackmagic to give users an idea of how the computer runs for its given use cases which is more or less day-to-day productivity.

For PCMark10 the 7090 Ultra gave us an overall score of 4,906 not bad for a general computer. Where it really shines is where users need it to in the essentials with 9,985. Productivity is 6,865 another solid score. Where it lacks is in the digital content creation with 4,676. Again, the 7090 is not really aimed at that crowd. 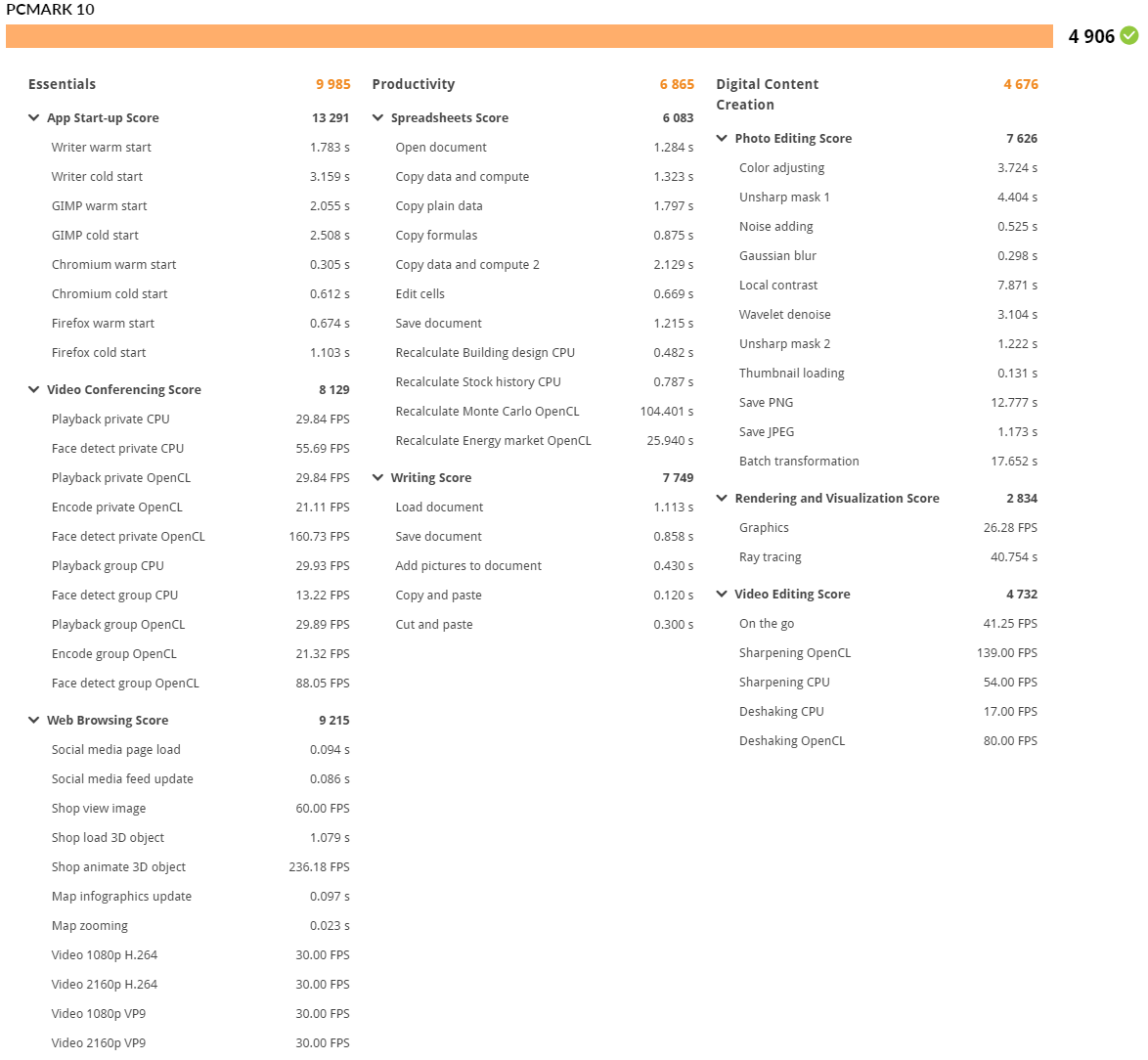 For Blackmagic disk speed, the internal drive gave us really good scores of 2.37GB/s read and 1.52GB/s write. This is more than enough storage performance for day-to-day tasks. 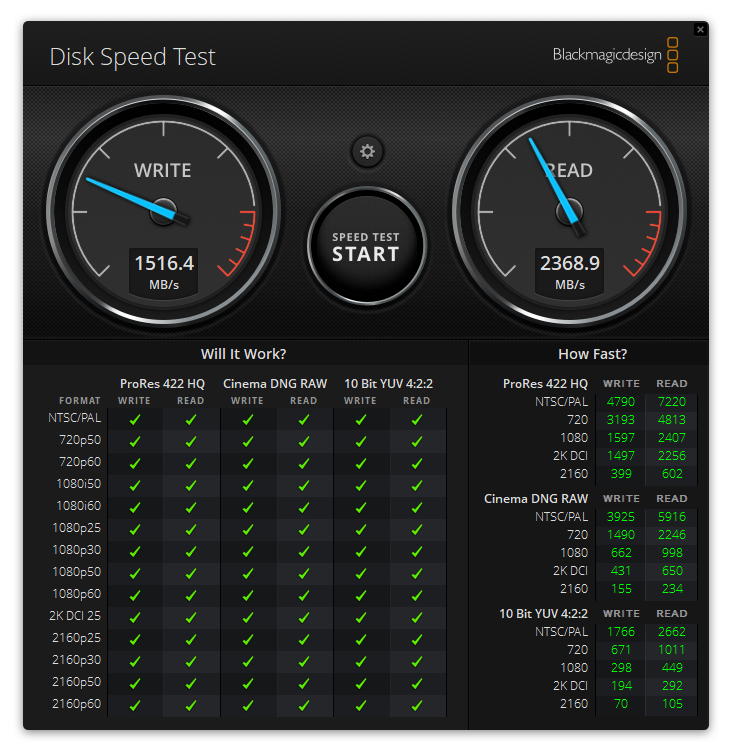 The Dell OptiPlex 7090 Ultra is a zero-footprint computer that can slide into a monitor stand or be mounted on the back of a screen. The 7090 Ultra gives an all-in-one experience though it has the advantage of being able to be configured and updated separately. Though aimed for general productivity, the diminutive computer is no slouch. It can be outfitted with an Intel Core i7 CPU, up to 64GB of RAM, and up to 2TB of NVMe storage. There is also an Intel Optane storage option for those looking to take advantage of lower latency storage. The 7090 starts at $800 and goes up from there depending on the features one adds to it.

As the Dell OptiPlex 7090 Ultra is not a workstation, we didn’t run it through the normal gamut of graphics-intensive tests. Instead, we ran PCMark10 and Blackmagic to get a better idea of how the 7090 would function in its given use cases. In PCMark10 the little computer did pretty well with an overall score of 4,906 but a very good score in essential with 9,985. In Blackmagic, the onboard storage showed it was up to just about any task with a performance of 2.37GB/s read and 1.52GB/s write.

Dell also gifted us…er…let us borrow a couple of their conference monitors for use with the Dell OptiPlex 7090 Ultra. We had the 34-inch C3422WE and the 27-inch C2722DE. Both were built for video conferencing with built-in IR webcams on top. There are both Microsoft Teams certified with a button just for that software on the front. Both have nice built-in speaker systems and can really enhance remote work in the collaboration sense. The C3422WE is curved and has a better overall picture but it is a bit heavy. The C2722DE is a better fit for most home-office work and comes with a lower price tag. However, both are fantastic monitors.

The Dell OptiPlex 7090 Ultra is a neat take on a full, small computer that can be placed inside a monitor stand or mounted to the back of one. It offers the benefits of an AIO with even more flexibility.

Wed Jun 2 , 2021
Online stores have seen tremendous growth in recent years. The pandemic has forced even technophobes to switch their shopping habits and hop onto the e-commerce bandwagon. This is why it’s so important for businesses to use the right tools and technologies to cater to their vast and ever growing customer […]