There are a few gadgets that take a regular beating from many of us, and if a robot revolution ever does come to fruition, it will probably begin with one of them. But until that fateful day occurs, let’s take a look at a few of the tech devices we’re all too eager to neglect. Because they have no souls–not yet, anyway.

There is no person in my life who I’m ruder to than the GPS navigation voice, whether it’s Google Maps or Apple Maps or whatever robot lady is trying to help. Think about it: This poor app is using advanced satellite technology to help me get somewhere fast, letting me know if there are delays or car accidents along the way.

Yet when I ultimately have an idea of where I’m going, I will yell at it to shut up and quickly grab the phone to turn it off, without even saying “Thanks” or “Couldn’t have done it without you.” Instead, it hears “Alright, I got it” as if I knew where I was going the whole time and the directions were merely suggestions I didn’t ask for.

It doesn’t matter how nice the headphones are, whether they’re bulky or small earbuds, whether or not they come with a case–at some point, they will be tossed in my backpack or the backseat of my car and forced to fend for themselves in those jungles. My toothbrush at least gets a small stand, and it costs way less.

I shudder when I think of those poor little headphones loose in my laptop bag, shivering in fright as they’re surrounded by loose peanuts, nails, paperclips, gummies, and old, no longer functional USB drives that are angry and roaming the outer reaches of the backpack like Bladerunner. “I don’t belong here,” the headphones must think.

It’s probably for the best that most video game controllers don’t have cords anymore. We all knew that one friend who jerked the controller back and forth like a maniac, nearly causing the console to fly out the window. They treated controllers like they were Wii motion controllers long before that technology even existed.

But we’re all rough on them. We press way too hard as if the controller can recognize pressure and urgency, throw them down when frustrated, and sometimes glance at the controller as if there’s something wrong with it instead of recognizing how much we suck at the game. They just take our abuse for years, and when one of the buttons inevitably starts sticking because of misuse, we toss them out or make that one friend you don’t like use them.

USB drives these days have the ability to hold all the data from our computers in a tiny stick, and according to movies I’ve seen, always contain important secret documents or viruses that can stop a corrupt company or destroy robot overlords. So why am I more likely to remember where I put a BIC pen?

There are probably a handful of lost USB drives with things that I mistakenly think are important on them scattered all over the country. We’re so delicate with them when inserting one into our computer, but the rest of the time, they bounce around whatever they’re in like a beach ball with data. Perhaps if that data had the ability to spill out like a casserole in an overfilled bowl with Saran wrap, we might be a little more respectful.

This is always one of our more saddening relationships with technology. Your phone may be a bit old and scratched up, and it knows you don’t respect it anymore and want a new one. It sees you walking by the Apple store window like that hackneyed meme with a guy looking at another woman. It sees you put it away quickly when using it around friends, so they don’t stare.

Yet it still diligently does its job, sending your texts and updating your apps, and taking perfectly decent photos. In some cases, though, it lasts so long that you begin to respect its well-worn character like it’s the old guy in a coming-of-age movie who gains the respect of the cool kids. “You still got it, old man,” the awful dialogue usually goes.

Remember, there will always be a younger phone, but yours has lived through multiple updates and seen things. It knows the ways of the world. Or maybe it’s just an old, bad phone. I don’t know. Go ahead and get a new one if you want.

Build a shelf-size vintage computer museum made of paper

Wed Oct 26 , 2022
Enlarge / An example of eight papercraft vintage computer models designed and assembled by Rocky Bergen. Yesterday, a Winnipeg, Canada-based artist named Rocky Bergen released a free collection of miniature papercraft vintage computer models that hobbyists can assemble for fun. They are available on The Internet Archive in a pack […] 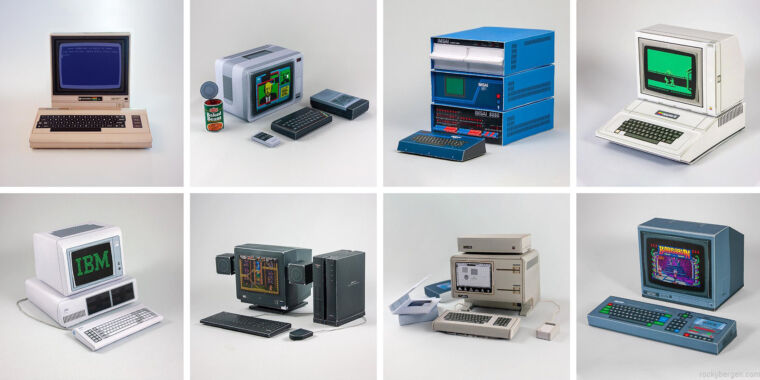