FARMINGTON — Members of the San Juan County Commission received a half-hour briefing on the work of Four Corners Economic Development officials during their Aug. 17 meeting, a presentation that focused on the agency’s digital marketing efforts.

Arvin Trujillo, the organization’s CEO, said Four Corners Economic Development is working hard to diversify the economy throughout the region, not just San Juan County. One of its primary vehicles for achieving that goal, he said, is its new website, which was launched on April 1, thanks to a $20,000 grant from the Merrion Family Foundation.

Trujillo has previously said 4CED identified the need for a new website last year and contracted with the Golden Shovel Agency — a Little Falls, Minnesota-based economic development marketing firm that emphasizes website development and online community — to produce it.

Chris Hunter, a 4CED consultant, walked commissioners through the new site’s particulars, describing how it represents a substantial improvement over the agency’s old site.

“(Four Corners Economic Development) had a website, but the metrics, the ability to get people to stick with it, was minimal,” he said. “It was a start, but it wasn’t much.”

The new site features easy-to-access material about communities throughout San Juan County that had never been compiled in one location until now, Trujillo has said. Hunter said that material already is drawing attention, pointing to the fact that the average viewer is spending more than 8 minutes on the site. The average time a viewer spends on a typical economic development site is less than two minutes, he said.

That means people are finding value in the site, he said.

The agency also has launched new Facebook and LinkedIn pages that also are assisting the effort to digitally market the region, Hunter said.

But he pointed to one area where 4CED is falling short, explaining that the agency has no advertising budget right now.

“Down the road, I think that’s something we’ve got to look at, and it’s one of the significant underfunded challenges we have as an organization and as a community,” he said.

Hunter demonstrated one of the new website’s more distinctive features, a search function that allows viewers to see every property for sale or lease in the county that is zoned commercially or industrially. He showed how viewers can narrow their search to view properties of a certain size or that have other characteristics.

“We have over 200 properties that are commercially or industrially zoned for sale or lease, but you would never find them except for on this website,” he said. “We know this is going to drive traffic.”

Hunter also cited the relatively low price of those properties.

During a question-and-answer session, Commissioner GloJean Todacheene asked why the Navajo Nation wasn’t among the 64 organizations that are members of 4CED. Trujillo responded by saying he is working to remedy that situation, and pointed out that such Navajo entities as Navajo Agricultural Products Industry, the Navajo Transitional Energy Company and the Navajo Nation Oil and Gas Company are members.

Hunter said the agency’s new website includes information from throughout the region, including the area covered by the Navajo Nation and the Hopi Reservation.

He asked members of the commission to support the agency by subscribing to its newsletter, liking its social media accounts, sharing posts from those accounts and continuing to provide financial support for the organization, which receives $50,000 annually from the county. He also asked them to hold the agency accountable for that investment.

But he cautioned commissioners not to expect too much from the new website too quickly.

“Bottom line on all this is, it’s a long-term game,” he said. “I think sometimes people expect miracles out of organizations that are starting from nothing, or mostly nothing. It’s going to take a while. We’ve got to continue to work hard at marketing San Juan County.”

Mike Easterling can be reached at 505-564-4610 or [email protected] Support local journalism with a digital subscription.

Tue Aug 24 , 2021
A humanoid robot delivers drinks to customers at the Dawn Cafe in Tokyo. — AFP pic TOKYO, Aug 21 — At a Tokyo cafe, Michio Imai greets a customer, but not in person. He’s hundreds of kilometres away, operating a robot waiter as part of an experiment in inclusive employment. […] 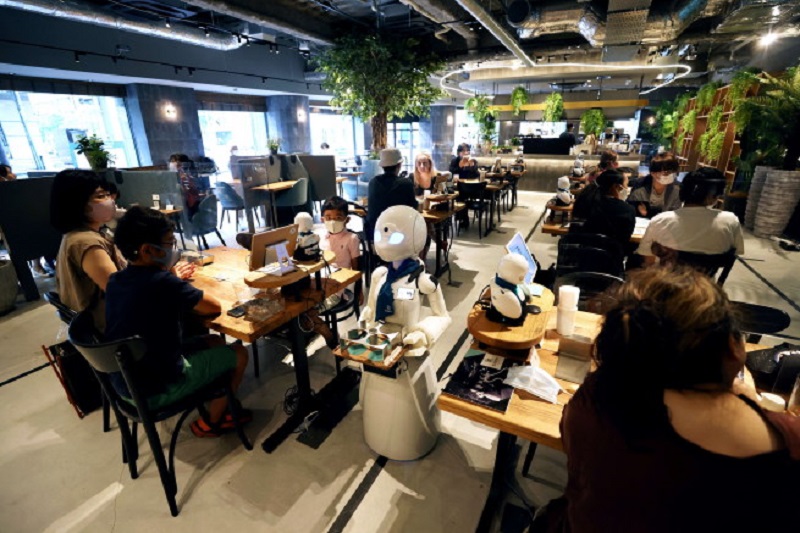